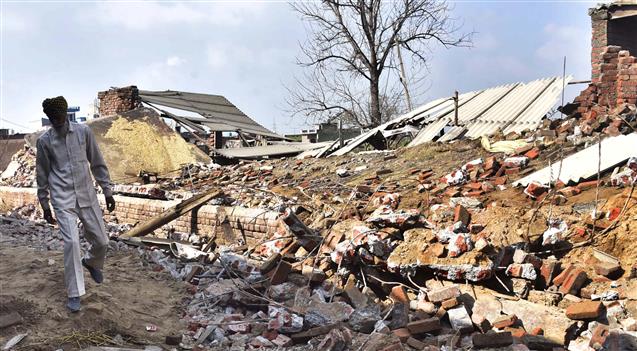 In a tragic incident, a worker and 11 buffaloes died after the roof of a barn collapsed at a dairy in Chahran village in Ladhowal overnight from Friday to Saturday.

Two calves and a buffalo were rescued from the debris after the incident.

The worker who died in the incident took care of the animals. He was identified as Narayan Paswan from Bihar. He had worked at the Satpal dairy for about eight years.

The family of the deceased, including his wife, two sons and two daughters, resided in Bihar and he was the sole breadwinner in the family.

After the incident, a team from the National Disaster Response Force (NDRF) went to the scene and launched a rescue operation.

According to reports, the incident happened around 1:30 a.m. on Saturday. Paswan slept in the barn where the cattle were kept. The shed was quite old and not in good condition. Even its roof already had cracks but the owner had not done the necessary.

Relatives of the deceased also attended the scene and demanded an investigation into the case. They blamed the owner of the dairy for keeping the animals and the worker in a risky place. They also demanded compensation for the family of the deceased.

Later, Gill MLA Kuldeep Singh Vaid arrived at the scene to provide an update on the situation. He also spoke with the deputy commissioner, Ludhiana, and urged him to prepare a compensation package for the deceased worker.

Ladhowal SHO Gurshinder Kaur said that when the incident happened, NDRF authorities were notified and a rescue operation was initiated.

The SHO said a further investigation has been opened into the incident.

13 head of cattle died in a similar incident in September

Notably in September last year, in a tragic incident, 13 head of cattle, including eight cows, one bull and four calves, died after the roof of a dairy at Haibowal Dairy Complex collapsed. After the incident, then-Mayor Balkar Singh Sandhu also assured that he would ask relevant officials to investigate and notify dairies run from unsafe buildings, but nothing happened. Still, there are many dairies in the city where cracks are visible on the walls and roofs, but the concerned authorities have not yet paid attention to the matter.

Migrant worker Narayan Paswan, from Bihar, who died in the roof collapse incident, was caring for the buffaloes. He had worked at the dairy for about eight years. The family of the deceased, including his wife, two sons and two daughters, are staying in Bihar. He was the sole breadwinner in the family.