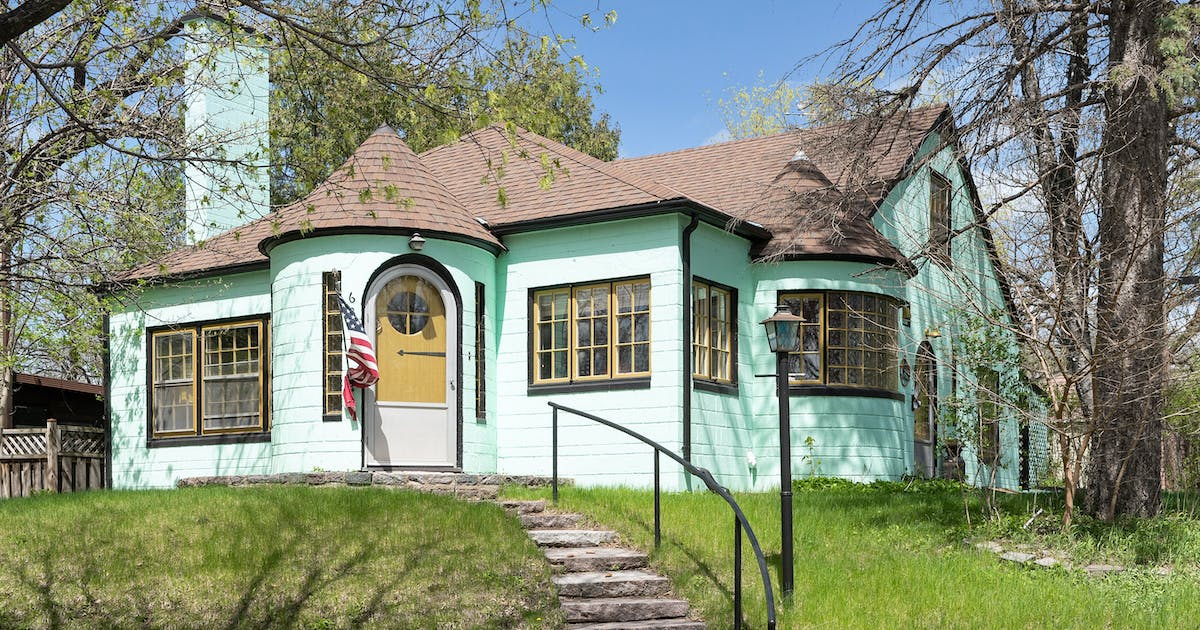 A listing of homes in St. Cloud — in all their pink and teal glory — has Twitter in turmoil. In fact, the Minnesota bungalow was so distinct that it caught the eye of Zillow gone wild. The popular Twitter account spotlighted the house, garnering tens of thousands of likes, thousands of retweets and a nickname: “The Barbie House”.

“Perfect for Barbie and Ken” read one comment. “Is that where ‘Barbie’ [the upcoming movie] will be shot?” asked another. Someone else wondered, “Who are these people?”

Those people (well, that person) is Cody Horton, who bought the house three years ago. He was delighted by the 1940s bungalow, with its turret-inspired entrance, rounded archways and built-in features that included benches and a round banquette.

But he also wanted to infuse his personality into the house.

So while he set out to create a strong palette, he wasn’t going for a Mattel dollhouse aesthetic. Instead, a 1980s surfwear brand known for its bright colors was the inspiration.

“Ocean Pacific was very popular when I was growing up and I loved getting their shirts,” Horton said. “So I decided I was just going to do the inside like the Ocean Pacific thing. If I wanted to have another Ocean Pacific shirt, what would it be? Teal, pink, yellow, black, and gray. And that’s what I have done. “

The house has already come with a bit of fantasy. Horton inherited a bathroom with murals – one of a circus tent painted on the vaulted ceiling and another of a giraffe, kangaroo, zebra and other animals on a sliding shelf. The kitchen had a pink counter. An upstairs room was wallpapered in bold print.

So he added to that.

For the kitchen, he asked a professional painter friend to paint the walls pink and the cabinet knobs and handles black. Horton also installed diamond pattern flooring in pink, black and white.

“I had a pink kitchen before, when I lived in south Minneapolis,” he said. And “I think pink and black go well together.”

In the living room, Horton had the walls painted pink and laid a red rug over the cork floor. In the upstairs seating area, he played on the existing green and white leaf print wallpaper by adding a teal rug. The exterior of the house has also been given a West Coast beach vibe, ranging from white to sea-foam green.

“It stays true to the Pacific Ocean theme,” Horton said.

Now the sun is setting on Horton’s time at home. He’s ready to return to his roots and has listed the three-bedroom, two-bathroom spot spanning 2,100 square feet.

“The winters here are just a little too much,” the Texas native said. “I love riding motorcycles, and you can’t do that all year round here.”

Listing agent Dolly Langer said not only does the house on Riverside Drive have views of the Mississippi River, but it’s walkable to Munsinger Clemens Gardens.

But the house is special in other ways.

“I think one of the things, aside from the decor, that makes it super unique is the material. It’s made of cinder block, which is pretty rare,” she said. “Another unique aspect is that it’s only had two owners, which is pretty good for a house that’s over 80 years old, so it’s still very much intact.”

For all the chatter on social media about the house being a Barbie house, there are also remarks like “it’s the perfect house” and “I love it.”

Horton takes his house being an internet sensation in stride, enjoying some of the comments and a sense of pride from others.

“I can’t get too caught up in what people think, to each their own,” he said. “But I would say the best compliment I got was from a friend who said it was exploding on the internet and making people happy. It makes me happy that it brings joy to others.”