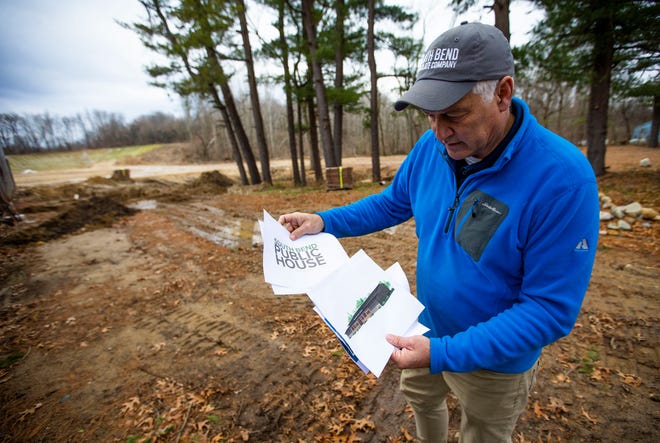 A large bright yellow and brown sign has been on the south side of US 20 near the bypass for several years, promising “exciting business development” and “great opportunities for local artisans.”

And the first phase of the long-planned proposals may soon be underway.

Mark Tarner, founder of the South Bend Chocolate Company, initially announced in 2017 his intention to move his factory from its Sample Street location west to approximately 70 acres of land southwest of St. Joseph Valley Parkway and US 20, just west of South Bend International Airport. In addition to the factory, plans for a dinosaur and chocolate museum were also drawn up.

However, the first of the projects to open in the development project will be a restaurant, South Bend Public House.

Similar to the Howard Park Public House, which Tarner opened in January, the South Bend Public House will be what he describes as an agri-restaurant, where farming, food preparation and consumption come together. The ultimate goal will be to educate visitors about agriculture and the food industry as a whole.

“I think it’s going to be a great place,” Tarner said. “We have a lot to learn about agriculture, but I bring in professionals.

Tarner plans to completely transform a rusty warehouse on the property that he said once housed machinery into a space that will look like a “beer hall meets a stylish picnic.” A permit shows that about 6,100 square feet are expected to be renovated, with Chocolate Company director of operators Kristina Tressler saying an additional 1,500 square feet will be added. When complete, the grand restaurant will sport a kitchen that Tarner says will be larger than the entire Howard Park location, a large beer garden patio on the west side, and an interior floor plan similar to a brewery that you can find in Germany.

“We’re going to have different options here (than at Howard Park),” Tarner said. “Really, Howard Park is a bar with gourmet food. This will be the seesaw where the bar will only be a part of it and there will be good food.

Diners won’t have to look far to wonder where the ingredients for their plates come from, as Tarner plans to use around 30-40 acres of land to grow crops ranging from fruits like apples and grapes. with fall vegetables like pumpkins. The infamous chicken coop will also be at location 24820 US 20.

“You’re going to be able to have dinner and have chickens roam your feet until the health department tells me I can’t,” Tarner laughs. “And God knows they will.”

Admitting that he is not a farmer, Tarner said he plans to build on long-established farmers who have years of experience in growing, educating and educating people on cultures. The restaurant, Tarner says, is just one cog in a much larger plan to make development a destination.

“What I want to do is make it a destination for people who travel and maybe a place that local residents bring their family and friends,” Tarner said. “It will really be a showcase because I think there is so much competition with restaurants that you have to create an experience and that’s what we’re going to do.”

But not so long ago, development plans were in jeopardy.

When Tarner bought the property four years ago, he received $ 500,000 in cash from regional towns in Indiana for the Dinosaur Museum. But to receive the money, the board of directors of the South Bend-Elkhart Regional Development Authority demanded that construction begin by April 30, a deadline Tarner said he could not meet in due to the effects of the pandemic.

“I’m not even sure I can get funding from the banks within the timeframe they requested,” Tarner told the Tribune in late March. “I probably should have delayed them a bit, but I was honest. Or they should have proposed (a deadline). It was very unexpected.

But in the fall, hopes in the project were somewhat renewed. Tarner, an amateur paleontologist, showed dinosaur bones he found in Montana over the summer and in doing so explained that plans for the museums were back thanks to federal help and other developers.

“I’m kind of a lone wolf, for lack of a better term, but people have come to me to team up,” Tarner said. “So I opened up myself and my ideas to the developers and that’s really what made it happen. “

Tarner said plans for the $ 15 million development have yet to be determined, depending on any other money that may be allocated to him. On Tuesday, the northern Indiana region received $ 50 million from the Regional Economic Acceleration and Development Initiative or READI program. The region’s Regional Development Authority will now spend the next few months sorting through some 200 concrete project and program proposals, including Tarner’s development plans.

“I think we have a chance,” Tarner said.

But while the factory and museum plans depend on this allocation of money, the restaurant’s plans have already been budgeted accordingly, Tarner said. With his eyes still on the future, Tarner said he hopes to eventually open up similar concepts in other places in the region such as Mishawaka and St. Joseph, Michigan. But the South Bend Public House on US 20 will become the home port.

Honolulu, the last county to adopt a hotel tax