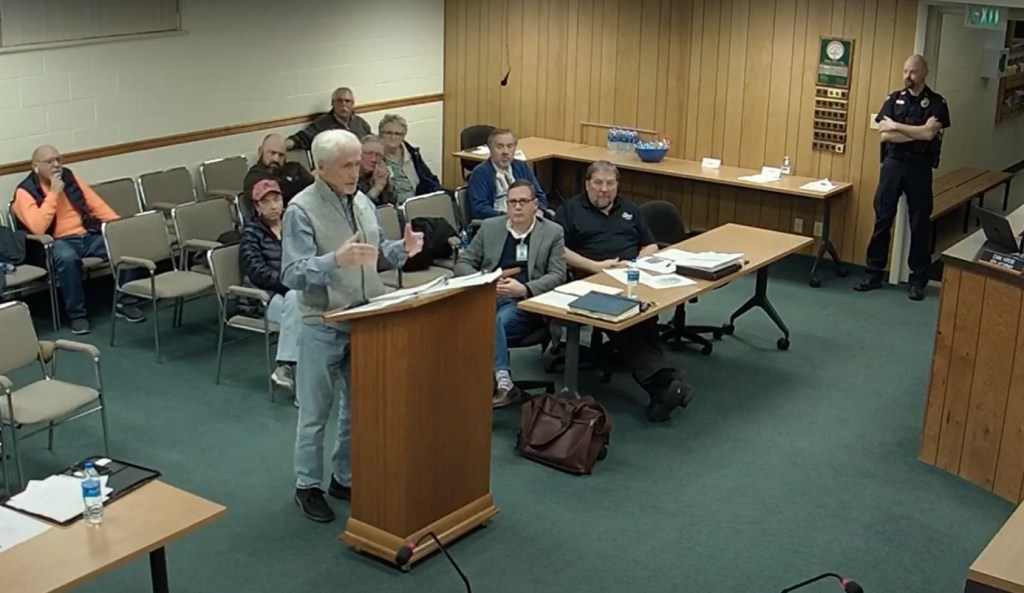 Members of Brush Town Council met for a regular meeting on Monday, January 24. The majority of the meeting was in session for two public hearings regarding the proposed Westwood Village development in Brush.

The first report, submitted by Deputy City Administrator Rick Keuroglian on behalf of city staff and the Brush Planning and Zoning Commission, was a rezoning proposal categorizing residential development as a medium-density major subdivision.

“It’s a big decision for our city, and I didn’t take it lightly. I spent a lot of time thinking about it, meeting the staff, discussing it…but there are three things that helped me understand the magnitude of this decision,” Keuroglian said as he listed the goals to to follow. Full brush plan, City Council Priorities and the City code.

Keuroglian gave a brief history of housing development in Brush, noting two main periods of growth, one in 1939 and one in the 1970s. Both times over 400 new homes were built.

He pointed out that housing has always been an issue in Brush. When the comprehensive plan was written in 2007, it stated that 97% of Brush’s housing was occupied. Discussions about continuing the Westwood Village project as a future town development have been going on for years.

Keuroglian has read the goals and policies of the Global Brush Plan document. Policies 5.1 through 5.3 specifically outline the goals to “preserve existing Brush neighborhoods as aesthetically pleasing, safe and liveable places”, “promote new, high-quality residential neighborhoods that are liveable, safe and an asset to the city” and “protect existing neighborhoods and new residential development from encroachment by incompatible land uses.

Housing is not just an issue in Brush, but currently an issue across the entire state of Colorado.

“There are communities that desperately need help and are crying out for developers. And we have a developer, so keep that in mind,” Keuroglian said in reference to Land Developers INC. (LDI), which submitted its application and fees on November 8, 2021.

Keuroglian went on to explain that the Westwood project would also achieve the goal – outlined in both the overall plan and the council’s priorities – of creating a variety of housing (types, densities, prices) to meet the diverse needs of the citizens of Brush. .

Several steps have been taken to meet city code requirements and ensure public awareness of the project. Every home within 300 feet of the proposed development was mailed on December 10, 2021. The proposed zoning map was published in the Brush News-Tribune on December 15 and 22, 2021, and in the Fort Morgan Times on December 15, 2021 13 and 20 2021. Six signs have also been placed on the property.

Keuroglian clarified that the steps in the process begin with the application and the sketch/site plan before moving on to discussing the rezoning and the preliminary plan, the two topics to be discussed at the January 24 meeting. Additional details on construction, design, utilities and more will be discussed at future meetings when the final platform is discussed and the Subdivision Improvement Agreement (SIA) is approved.

Jay Stoner, President of LDI, and Shane Boyle, Civil Engineer at Civilworx Llc, then addressed the Board to add further details on the project and share some of LDI’s past successes in developments such as the proposed one.

Boyle mentioned the importance of interconnectivity in the project with plans to include things like walking paths and green space for “more of a neighborhood feel.” He also discussed the plan to direct new neighborhood traffic to main roads rather than existing neighborhoods.

Stoner added that plans are underway to provide basements in new homes. He also briefed the Board on LDI and its successes in northern Colorado over the past 45 years. Stoner’s most recent project in Morgan County was the creation of the Kiowa Park Subdivision in Wiggins, which now houses 335 houses and 48 apartments. LDI is proud to lead by commitments and architectural guidelines, which the company firmly enforces.

“(Stoner’s) is coming back with a totally different project that addresses almost all of our concerns that we had since that first Planning and Zoning Commission meeting,” Keuroglian said. “We’ve spent two years developing this to this point.”

Members of the public were then invited to raise concerns specifically about the rezoning proposal. The concerns brought to the Board’s attention were acknowledged, although it was clarified that they would be addressed in the next steps of the process, as they were not directly related to the approval or rejection of the proposal. of rezoning.

The Board voted to approve the application as submitted.

Keuroglian returned on behalf of city staff to present the proposed major subdivision preliminary plan for Westwood Village. He explained that the preliminary plan is a more detailed part of the sketch plan, outlining things like sewage systems, road layouts, ground depths and utilities.

“We still have a lot of work to do, by the way. But the preliminaries (flat) show that this development works,” Keuroglian said. “The preliminary engineering is very thorough, but it is not final. It allows us to start taking these drawings, working on them…we’ve already found areas that we’re going to have to change. It is normal in the procedure.

Boyle said, “This is just another step in the process required by the code. We’ve done enough engineering in terms of the site to know that we can make the site work.

Stoner further clarified that the approval is merely for a two-dimensional drawing and design and does not automatically provide LDI with permission to build anything. He also reiterated the great need and benefits of the Westwood Village project in the town of Brush.

Members of the public were again asked to voice their concerns, this time specific to the preliminary dish. Comments and concerns were acknowledged and recorded for future review.

The Board also voted to approve the second application as submitted.

Both public hearings can be watched in full via the City of the Brush! Youtube.