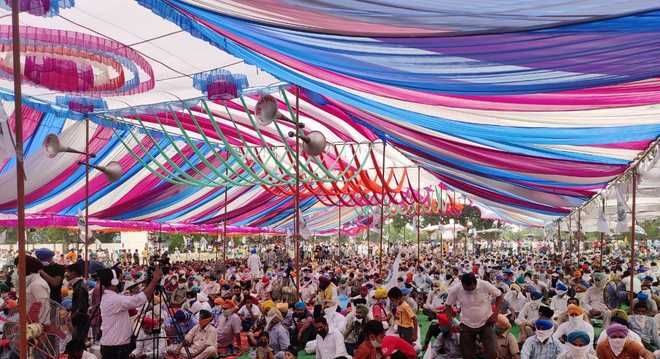 The Electoral Commission’s (EC) ban on physical gatherings has hit tent and PA owners hard. They say this is the first time they have had no bookings during election season and have been out of work.

“Usually we do good business during elections, but due to the EC ban on holding physical gatherings, we have no customers. If the ban continues, we will have no income,” said Amrik Singh, a tent owner in Malerkotla.

In conversation with The Tribune, some tent owners said Covid has already caused them huge losses, as due to rising cases the government has repeatedly banned social gatherings. Now, many were expecting good business in the election, but the pandemic has once again spoiled them.

“I had recently added more items to my store as I was hoping to receive huge orders due to the polls. But as the EC has banned physical gatherings, I will not be able to recover the cost of my inputs and therefore suffer losses,” said another tent owner in Sangrur. Many had also taken out bank loans to expand their business, but are now facing massive losses.

“Everyone should be careful and help prevent the spread of the virus, but the government should also think about the plight of tent house owners, who are being hit hard due to restrictions on holding events,” said one. owner of Sangrur tent houses.

Candidates from almost all political parties are also eagerly waiting to hold physical rallies and are awaiting orders from the EC in this regard.

“We hope that in the next few days something positive will happen,” said a politician on condition of anonymity.

Usually we do good business during elections, but due to the EC ban on holding physical gatherings, we have no customers. If the ban continues, we will be left without income. — Amrik Singh, tent owner in Malerkotla