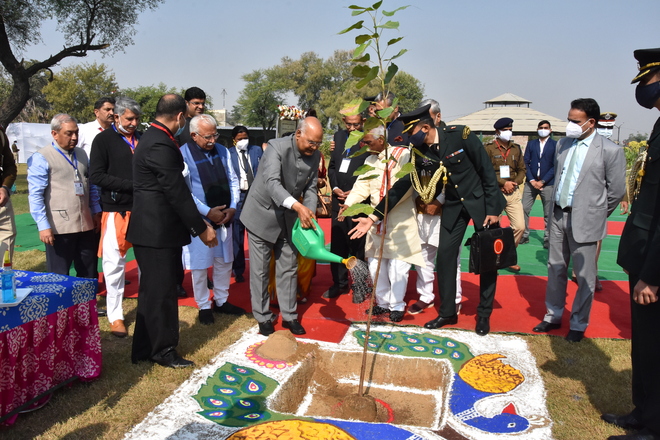 President Ram Nath Kovind today visited the Sui Model Village in Bhiwani District, which paved the way for development under the aegis of Adarsh ​​Gram Yojana. He inaugurated public facilities there.

This village is developed under the name of “Adarsh ​​Gram” by the Mahadevi Parameshwaridas Jindal Charitable Trust under the program of the government of Haryana, the Swa-Prerit Adarsh ​​Gram Yojana (SPAGY). Speaking on the occasion, the president noted that SK Jindal and his family have made immense contributions to make Sui village a model village. “It is a beautiful example of attachment and gratitude to our homeland. I am sure the villagers will make good use of the school, library, drinking water facilities and other facilities developed in the village, ”he said.

The president said rural development is the basis of national development in our village-dominated economy. He praised the government of Haryana for designing and implementing the Adarsh ​​Gram Yojana. He said, “If we all work for the development of our villages, then our country will become a developed nation. He also interacted with the children of the village school. Chief Minister Manohar Lal informed that the state government has launched the “Pran Vayu Devta Pension Scheme” to preserve old trees as heritage. Under this scheme, a pension of Rs 2,500 is paid for the maintenance of hundred-year-old trees. He said the president’s visit to inaugurate Adarsh ​​Gram Yojana would inject new energy into rural development in Haryana. Appreciating the Jindal Trust for its contribution to the development of the village, the CM said the government would undertake more projects in the village as a matter of priority. Deputy CM Dushyant Chautala suggested that the villagers initiate a development project within the framework of the “One Block One Product” program. He said the government was ready to set up a 50-acre industrial cluster here, which will be the first cluster to be built under the “One Block One Product” program.

The Holiday Open House will take place this Sunday, November 21 in Pratt