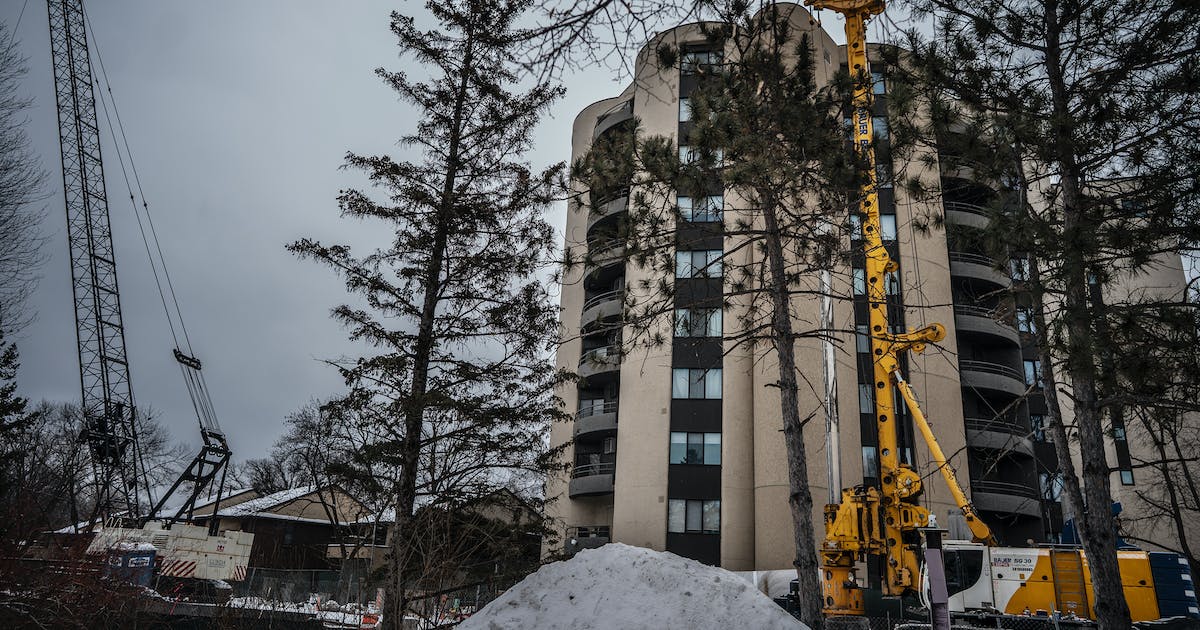 A proposal in the state Legislature would protect owners of the Cedar Isles condominium complex in Minneapolis who say construction of the Southwest Light Rail Line damaged their property.

Introduced by Sen. Scott Dibble, DFL-Minneapolis, an amendment to the omnibus transportation bill would partially compensate condo owners for damages caused by construction of the 14.5-mile line between Minneapolis and Eden Prairie.

The effort comes as the contractor for the $2.7 billion light rail project prepares to resume work near the condos later this month.

Construction of a tunnel wall was halted in late January after residents of Cedar Isles discovered cracks in the walls and floors of condo towers. Originally built as grain silos in the early 20th century, the structure was converted to residential use in the 1980s.

Although a forensic engineer hired by the Metropolitan Council has assured residents that the construction of the light rail was not the likely cause of the cracking, many Cedar Isles residents are deeply concerned that more damage could occur a once the construction is accelerated. In some places, the Southwest Train Tunnel is within inches of the condo building foundation.

“People living [at Cedar Isles] are extremely frustrated,” Dibble said. “They can’t even bring in real estate agents if they want to sell their house; they are told it cannot be listed.”

Dibble’s amendment was approved last week. While there is no guarantee it will pass in the final hours of the legislative session, it appears to have bipartisan support.

“Your home is probably the greatest asset you have in your life,” said Sen. Scott Newman, R-Hutchinson, chairman of the Senate Finance and Transportation Policy Committee, which supports Dibble’s amendment. “Imagine the government coming in and all of a sudden your house is worth nothing,”

All costs associated with the amendment will be borne by the Southwest Project – not the state. The project’s budget exploded in part due to the complicated construction of the tunnel in the Kenilworth Corridor.

In January, the council said the overall cost of the project would climb by $450 million to $550 million, for a total of $2.75 billion, making it the costliest public works project in the history of the city. the state. The project is approximately 60% complete.

Dibble’s amendment calls on the Met Council, which is building the line, to compensate condo owners in Cedar Isles for the devaluation of their property related to the construction of the light rail. Condos must be reappraised by a Minneapolis or Hennepin County real estate appraiser by January 1, 2023.

The council must ensure that the work on the southwest will not cause further damage to condos in Cedar Isles and that the units will remain safe to occupy, according to the amendment. The board must also engage a third party approved by the condo board to repair damage deemed to have been caused by the construction of a light rail transit.

The amendment also requires the council to provide free office space to Cedar Isles residents who can no longer work from home due to Southwest construction disruptions.

And the council must reimburse the condominium association for all the costs it has incurred in recent years to hire engineers and lawyers for expert advice on the construction of the southwest – a bill that has risen at around $250,000 so far.

“We are very grateful for that,” said Russ Palma, a Cedar Isles resident and vice president of the condo association. “We really have to counter that David and Goliath feeling that we have with the Met Council. We’re worried about being crushed by the council. They have so many resources that we don’t have.”

In a statement, a spokesperson for the Met Council said: ‘We are aware of the recently passed amendment and are currently analyzing the wording.

There seems to be some disagreement on what caused the cracking.

Socotec Engineering Inc., a company hired by the council to investigate damage to the condo, said 75% of the cracks resulted from “seasonal temperature changes” that caused the structure to move. The situation was exacerbated by the support system used when the towers were renovated 40 years ago, the company concluded.

The construction of the southwest line was one of four factors contributing to 25% of the building movement, according to Socotec. Others were wind, vibration from nearby freight trains, and deferred maintenance.

“We believe the building movement has been happening for a while,” said Robert Vecchio, CEO of Socotec Engineering, at a recent presentation to condo owners that was not open to the public. A recording was made available to the Star Tribune by a resident present.

“The cracking has been there for a while and may have become evident over the past few months,” Vecchio said.

The 90-minute meeting was tense at times, as several owners seemed skeptical of the company’s findings. As one resident put it, “These findings defy logic and defy science.”