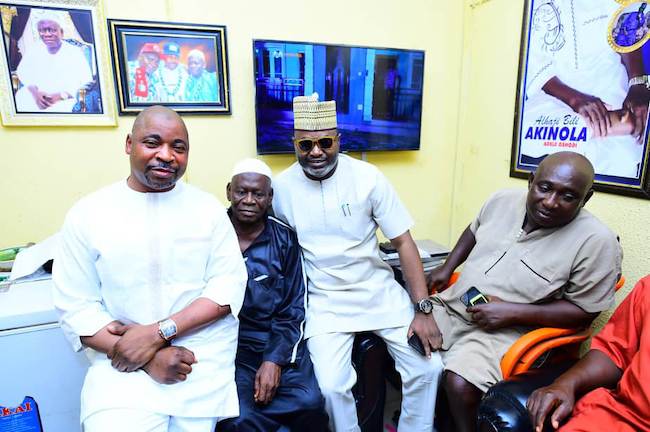 The regent of the Oshodi kingdom, Alhaji Biliamnu Akinola, said no ruling house had endorsed the president of the Lagos State branch of the National Union of Road Transport Workers (NURTW), Alhaji Musiliu Akinsanya ( MC Oluomo) as Oba of the country of Oshodi, pointing out that he is not from the ruling house of Al-maroof as claimed.

Akinola, in an exclusive conversation with Online forumwhile reacting to a viral report on social media, said there had been no reconciliation meeting between the ruling houses and the transport boss.

Earlier in an interview with Saturday Grandstandthe regent had caused controversy by declaring that MC Oluomo did not belong to any of the eleven ruling houses of the kingdom and was therefore not entitled to the royal stool.

Reaffirming his statement, Akinola said that MC Oluomo does not belong to the Al-maroof family or any of the ruling houses of the kingdom.

He said, “Oshodi LCDA Council Chief, Hon Kehinde Oloyede (Kendoo) is from the Almaroof ruling family because his mother is from there.

But Musiliu Akinsanya MC Oluomo is not from the Almaroof family or any ruling family in Oshodi country.

From what we heard, there was an agreement between Kendoo and MC Oluomo in the last local government election.

Kendoo, from what I heard, promised that if MC Oluomo supports his ambition for the presidency, he will in turn support his aspiration for the throne and that explains why MC Oluomo suddenly belongs to the Almaroof family. Kendoo did this to fulfill their promise to MC Oluomo.

Speaking on the alleged peace meeting where MC Oluomo was declared the next Oba of Oshodi land, the Regent said, “There was no formal meeting involving the eleven ruling houses and MC Oluomo.

What happened was that Oshodi LCDA Council Chief and MC Oluomo paid me an unscheduled visit at my residence.

They asked me to plead with all the ruling houses to support MC Oluomo’s aspiration to the royal stool.

“I have received calls from far and near following a report on social media platforms which claimed that I, the regent of Oshodi land and other ruling houses, had agreed to install MC Oluomo as our Oba.

The report is nothing but false and misleading. It was invented to manipulate the whole process and misinform the general public.

MC Oluomo is not from the Oshodi kingdom or the Al-Maroof family as the online report claims.

I was surprised because I wasn’t expecting any. I asked them the purpose of their visit and they said they wanted me to plead with all the ruling houses in the land of Oshodi to adopt MC Oluomo as the next Oba.

They said they also came to beg me not to be mad at Oluomo for not informing me of his aspiration before making it public.

And I replied that the case is already before the court and whatever action we take will be after the court has ruled on the matter.

So I was surprised to read online that the ruling houses embraced Oluomo when I didn’t even deliver the message it brought to them.

There were no formal meetings between the head of the council, Kendoo, MC Oluomo and any of the ruling houses.

It was a simple courtesy visit to my residence by the council boss and MC Oluomo and none of the ruling houses mentioned in the online report were present at the meeting.

We have not concluded who will be our king. All the ruling houses will decide who they want. Kendoo only asked me to speak with members of other ruling houses to allow MC Oluomo to be crowned Oba of the kingdom.

YOU SHOULD NOT MISS THESE NIGERIAN TRIBUNE HEADLINES

Despite the huge investment in the water sector by the government and international organizations, water scarcity has become a permanent nightmare for the people of Abeokuta, the capital of Ogun State. This report reviews the lives and experiences of residents obtaining clean, safe and affordable water amid the surge in COVID-19 cases in the state… No Ruling House No Ruling House

The Lagos-Ibadan Railway was inaugurated recently for fully paid operation by the Nigerian Railway Corporation after about a year of free trial. Our reporter joined the round trip train from Lagos to Ibadan and recounts his experience in this report… No ruling house No ruling house