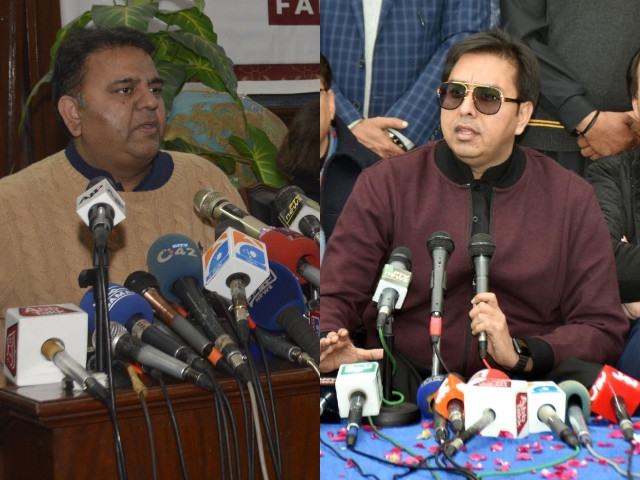 Ruling party ministers on Sunday opened a new acrimonious chapter against the opposition by dropping startling allegations that Pakistan Muslim League-Nawaz (PML-N) leader Shehbaz Sharif was ‘begging for a deal’ for four members of his family, and sought to blame Nawaz Sharif for the price spike.

The fiery tone and finger-pointing came as inflation once again becomes the rallying cry for opposition parties – a battle line they are seizing to topple the Imran Khan-led government.

Addressing a press conference in Lahore, Minister of Information and Broadcasting Chaudhry Fawad Hussain said soaring inflation and economic difficulties facing the country were one of the lingering symptoms of the policies undertaken by former Prime Minister Nawaz Sharif.

He claimed that the inflation was a by-product of the massive record loans borrowed by the PML-N and Pakistan People’s Party (PPP) governments during their respective tenures. From 1947 to 2008, the Pakistani government took out loans worth 6 trillion rupees, but from 2008 to 2018 the PPP and PML-N governments took out loans worth 23 trillion rupees, he said. said, adding that the PTI had paid $32 billion in debt service after his arrival. in power.

According to Fawad, former Prime Minister Nawaz Sharif lived in one of the most expensive properties in London while former President Asif Ali Zardari rents the most expensive flats during his visits to London. The federal minister explained that the working class was being crushed by inflation because they were not getting raises. “When spending exceeds income, inflation looks high.”

“The PTI will win the next general elections”

The Federal Minister appeared optimistic about the prospects of Pakistan Tehreek-e-Insaf (PTI) returning to power in 2023 as he criticized opposition parties for their “futile” anti-government protests, noting that the opposition was divided. He pointed out that with the exception of the ruling party, the PTI, no political party will be able to present its candidates for all the seats – 1,100 in total – in the next general elections.

Talking about health cards, he said Sehat Insaf card will end discrimination in health sector. He urged the private sector to invest in the health sector for its improvement. The health card will benefit the working and middle class segments the most, he added.

“The government does not care about the tactics of the opposition”

He said inflation was a “temporary phenomenon” which the ruling party would manage to tame before 2023. “The government is not indifferent to people and well aware of their difficulties.”

“We fight crises with determination. No matter how big the opposition marches, there will be no internal change or end of government. The opposition will face defeat. The democratic PTI government will complete its term, the senior diplomat remarked. He expressed his satisfaction and hinted that the intentions of the PTI government were positive. “The current government has the merit of not having had a corruption scandal.”

He observed that the government was trying to solve public problems. The global economy has also been in crisis for two years due to the coronavirus. However, he maintained that the difficulties were temporary.

“Shahbaz asked for an agreement for four family members”

Meanwhile, the prime minister’s special assistant for political communication Shahbaz Gill claimed that opposition leader in the National Assembly Shahbaz Sharif had “asked for a deal for four people” from his family. Speaking to the media in Faisalabad on Sunday, Gill said that as part of the proposed deal, a “pardon” had been requested for PML-N leaders – Shehbaz Sharif, Hamza Shehbaz, Maryam Nawaz and Nawaz Sharif.

Without sharing details and evidence of the claims, Gill claimed that the deal was sought for PML-N supremo Nawaz, Maryam, Shahbaz and his son Hamza. “This is the last plea Shahbaz has made – an offer made up of four people and a promise that even Maryam will not engage in politics,” Gill said. He added that the PML-N chairman had also pledged to travel to London if his “proposal” was accepted.

The Prime Minister’s aide said the PML-N leaders were eager to flee the country. “But Prime Minister Imran Khan will not let them escape and they will all go to jail,” he added. He said that Shehbaz would be put behind bars very soon, saying that a suspicious transaction of 4 billion rupees had been traced recently from the bank account of the PML-N leader’s peon.

“We won’t even give you a boiled potato, and here you are asking for a chicken burger deal,” he added.

The Prime Minister’s aide further claimed to have held three meetings with Nawaz during the latter’s hospitalization in Pakistan. “He would ask permission to allow him to let go.”