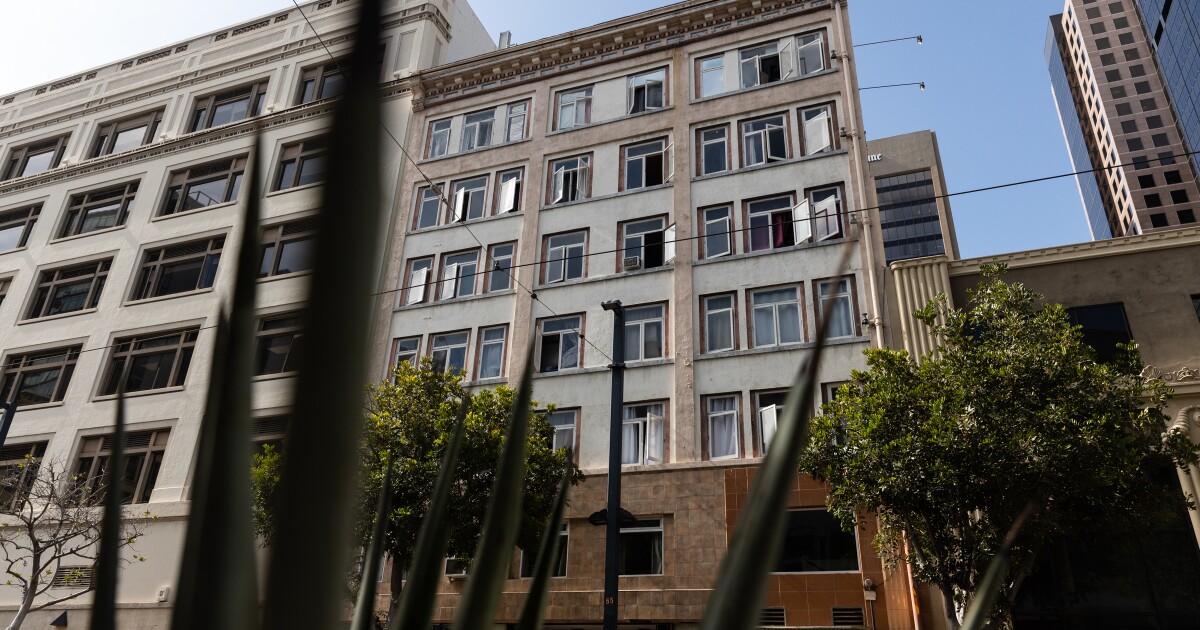 Some residents of a downtown San Diego hotel say they were left confused and frustrated by the city attorney’s office’s call to vacate and close their building because it’s unsafe , and that they defend the owner as a responsible owner.

“It’s been very stressful,” said Kevin West, one of 72 tenants at the C Street Inn.

While the city attorney’s office has called the single-room hotel a public nuisance, West and others call it home.

“I have a decent bedroom,” West, 69, said. “They made it sound like a slum. It’s not. Jack (Rafiq, owner of the property) has been working to improve the place.”

The city attorney’s office said in a news release Monday that residents were ordered to leave the building after city inspectors found health and safety violations during inspections in March and April.

Residents of the building said on Tuesday they had been hearing threats of eviction for months.

West, Neil Ricco and Roy Brown each remember being home around 8 p.m. on April 27 when firefighters and police knocked on their door and said they had to leave the building.

“The fire marshal came in with a heavy police presence and started knocking on doors saying, ‘You gotta get out, you gotta get out,'” Rico, 69, said. “There was a terrified woman on my floor. She had a walker. She’s disabled. She was sobbing. She thought she was going to be kicked out that night. It was cruel.”

The overnight eviction did not happen as firefighters and police left after talking with Rafiq, Rico recalls.

There was more confusion in May, when they said they received a release notice in 10 days. Those days passed without anyone being kicked out, and since this week there is no fixed day for people to go out.

The city has offered to provide each of the 72 residents with $4,720 to facilitate their relocation, and by Tuesday three people had moved out and were due to receive their checks the next day, city spokeswoman Leslie Wolf Branscomb said.

“A lot of people have to move, and the city and the Housing Commission are trying to make that as easy as possible,” Wolf Branscomb said.

The three tenants interviewed outside the building on Tuesday, however, said the offer from the city attorney’s office would not go far and that it had a catch.

“You have to find a place to stay first and then bring them a copy of the lease in order to get the money,” Brown said. “I explained that we all live paycheck to paycheck. There is no way for us to save money for a security deposit and two months rent.

Brown said the help from the city attorney’s office was different than the help he received from the San Diego Housing Commission when he left the Plaza Hotel SRO two years ago, when the building was being refurbished.

At the Plaza, he said the Housing Commission was offering upfront financial assistance to help residents find new housing rather than requiring people to first find new housing on their own.

Regardless of how the money is distributed, Brown said he fears it won’t be enough to find a new home in a tight rental market.

Brown said rooms in the 1913 building are 10 by 12 feet, slightly larger than most rooms at downtown ORS.

The Housing Commission recently set up a helpline for C Street Inn residents to get help finding new rental accommodation.

“A specialist called me yesterday and gave me a list of SROs I could apply for, so they’re making an effort,” Rico said. “The guy I spoke to with the Housing Commission spoke to me with great respect.”

Branscomb said Housing Commission officials will be at the hotel in person on August 1 to help connect tenants with new homes.

Rafiq, owner of J’s Property Management in San Diego, disagreed with some of the city’s claims about the building and said there was no need for the occupants to vacate.

Brown, Rico, West and another tenant who did not want to be identified said they believe Rafiq has already made necessary repairs to the sprinkler system, smoke detectors and other issues with the building. Rico said Rafiq was not a sleeper and actually lived in the building.

“He was an owner I saw every day working to improve the building,” he said.

Rafiq appealed the city’s order to pay the relocation costs, so the city paid the costs upfront and will seek reimbursement in an administrative hearing.

Inspectors also found trash in hallways, unauthorized plumbing modifications and electrical hazards, including an uncovered electrical junction box installed in a shower, according to the city.

According to the city attorney’s office, the city was not notified of the safety and health violations earlier because the landlord did not obtain a certificate of occupancy, which is needed to confirm compliance.

According to city code inspection records available on the city’s website, the city received dozens of complaints about litter, objects blocking the sidewalk, and “quality of life issues” at the hotel. C Street dating back to at least 2018.

Last year, the city of El Centro sought to enter into receivership a hotel owned by Rafiq after the hotel burned down, leaving dangerous charred remains to be demolished and cleaned up, according to a February 22, 2021 report. in the desert. Exam.