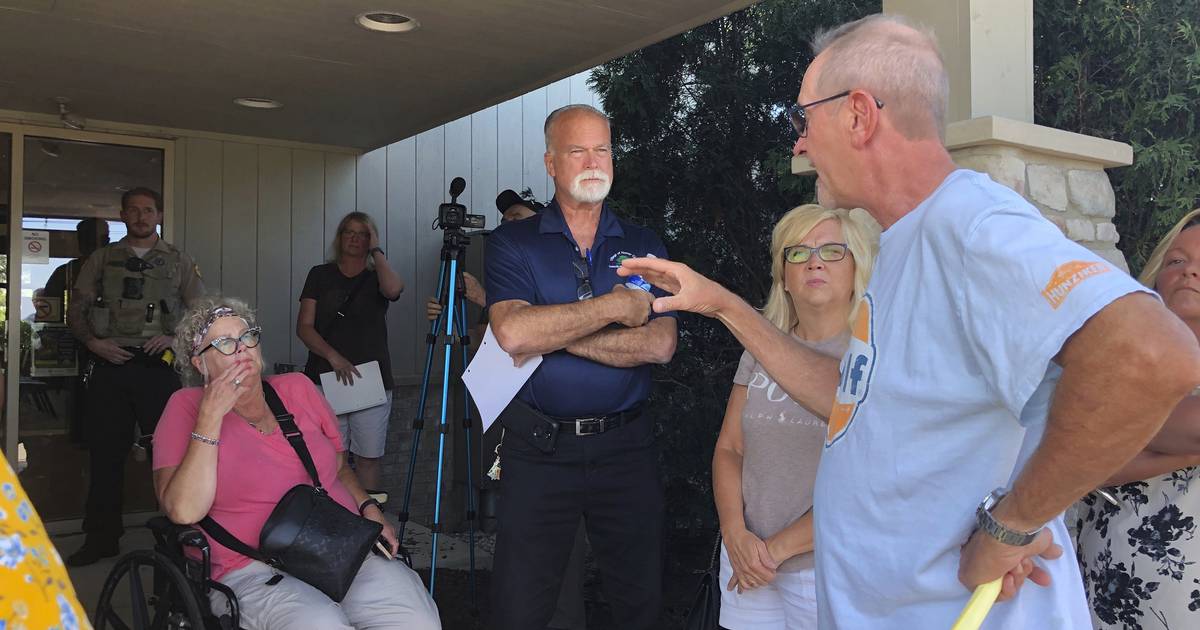 A special Homer Glen Village Board meeting called to discuss an incident last week in which a trustee was arrested and charged with battery after a verbal confrontation with the village clerk could not proceed Tuesday night due to a lack of a quorum.

Residents gathered afterward outside Village Hall to express their disappointment that the majority of the board did not attend while also urging their neighbors to get more involved with their local government.

Trustee Rose Reynders was arrested Friday and charged with battery after a verbal altercation with Village Clerk Christina Neitzke-Troike at Village Hall, in which Reynders “ripped up a Village Hall business card and threw it into the face of the victim,” according to the Will County sheriff’s office.

Neitzke-Troike received a no-contact order against Reynders Friday from a Will County circuit court judge.

Neitzke-Troike said she did not ask for Reynders to be arrested. She said proper protocol is to document the incident with the sheriff’s police when elected officials are involved in a dispute.

Both Neitzke-Troike and Reynders have indicated that they may run for Homer Glen mayor in 2023.

Mayor George Yukich, who is not running again as Homer Glen has term limits, called for Tuesday’s special meeting to discuss the incident and determine whether it carries any consequences.

The meeting was not allowed to proceed. Reynders plus Trustees Ruben Pazmino, Jennifer Consolino and Nicole La Ha were absent. Legislative counsel Cary Horvath told the members present that they could not discuss the matter without violating the Open Meetings Act.

Horvath said that trustees were not served proper notice of the meeting.

Reynders ran on the People Not Politics slate in April 2021 with Consolino, La Ha and Dan Fialko.

Fialko attended Tuesday. La Ha is out of state on business.

About 25 residents showed up Tuesday, and Yukich expressed his frustration board members declined to show.

“These people didn’t come here to look at me,” Yukich said.

“Obviously the other trustees sat this out because they are showing a sign of solidarity,” former Trustee Broque Backal said. “They ran on the platform of People Not Politics. It’s 100% opposite of that. It’s politics and politics and to hell with the people.”

Backal said trustees are often at Village Hall to get their mail and receive village emails as well.

“They knew full well about this meeting,” he said. “That’s the reason they are not here. …To plead ignorance is not an excuse.”

Yukich said a copy of the special meeting notice was sent via email and left in their Village Hall mailboxes.

He said he will continue to put the items on the Village Board’s agendas so a discussion can be held.

Several residents also said they are fed up with the infighting and animosity on the Village Board.

News updates from the south suburbs delivered every Monday and Wednesday

Residents urged one another to talk to their neighbors and encourage them to attend board meetings or watch them on YouTube so they are better informed.

Resident Karen Wirth, who is an administrator for the Homer Glen Village Square Facebook page, said she would like the village to set up a bipartisan oversight committee or ethics committee.

The verbal altercation occurred a day after Neitzke-Troike attended a charity event to benefit autism awareness. The event was held at three south suburban golf courses, and Neitzke-Troike was assigned to the same course where Reynders’ husband worked.

Neitzke-Troike said Reynders’ restaurant came up during a conversation with one of the golf course employees and she recommended Reynders’ food.

Michelle Mullins is a freelance reporter for the Daily Southtown.

A Place to Sit and Talk: The Walsh Hotel in Madinah is Open Again | Lifestyles