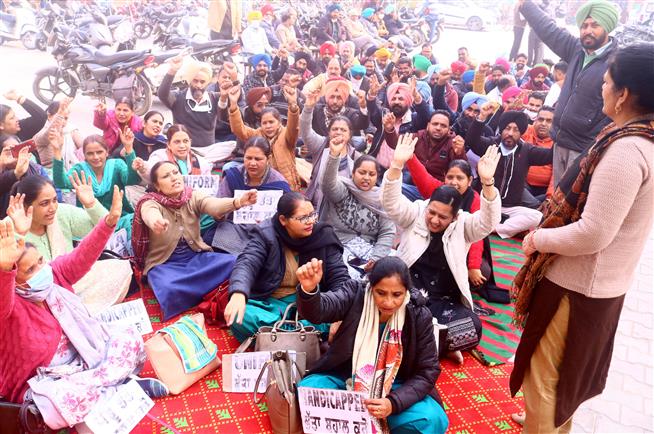 Health workers, under the banner of the Ministry of Health’s Joint Action Committee, held a protest today outside the Civil Surgeon’s office for their long-standing demands. Health workers staged a sit-in outside the office for hours and launched slogans against the state government.

The protesters demanded the regularization of contractual employees of the Ministry of Health and the National Health Mission of the Punjab, equal pay for equal work, the overturning of the decision to stop various allowances and shorten the period of three to two year trial.

The protesting employees threatened to organize a large protest rally on December 28 in front of the health ministry headquarters in Chandigarh and in gherao the residence of the chief minister. Restless workers have warned the government to respond to their demands by December 27 or prepare for a more intense protest. Randhir Kaur, a protesting health worker, said: â€œInstead of rewarding health workers for their extraordinary work during Covid, the government has cut various allowances. It is a shameful act. “

The protesting employees said they would go on an indefinite strike if their demands were not met. Meanwhile, Karnail Singh, co-organizer of the Department of Health’s Joint Action Committee, said: â€œWe will campaign against Congress in the next assembly election if the Congress-led government does not respond. not to our unfulfilled demands. â€

They later delivered a memorandum of their demands to Patiala’s civil surgeon, Prince Sodhi.