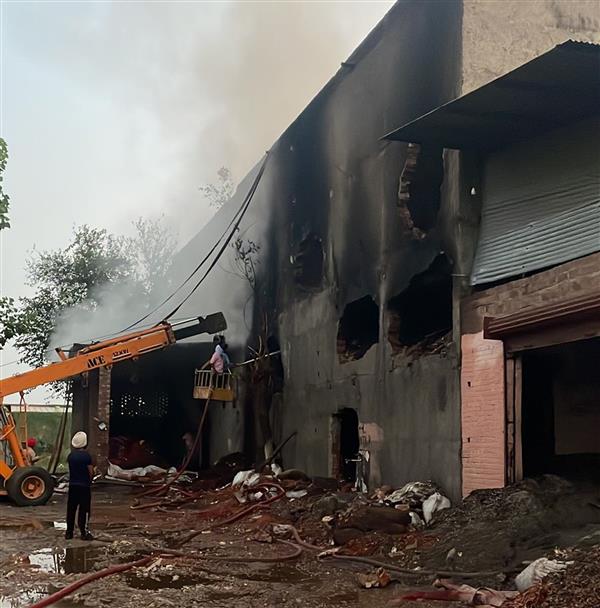 Even after two days, firefighters are still battling to completely extinguish the fire that broke out at a cold store in Rampura village in Manawala here.

The storage contained dried fruits, chili peppers and other spices and its burning caused breathing difficulties for residents of nearby areas, while around 250 patients were transferred from nearby Pingalwara Institute to the former building near the interstate bus stop or it is another branch at Dhirekot village.

About 20 firefighters were still on site and sprayed water continuously while the fire was still smoldering. Nonetheless, firefighters said the blaze was brought under control today. The district administration also remained on guard. The authorities of the Municipal Corporation went to the scene and remained there until late Monday evening.

Attari AAP MLA Jaswinder Singh Ramdas who visited the spot said he would submit a report to Chief Minister Bhagwant Mann. The district administration also issued a warning and said that if a resident feels a burning sensation in their eyes or nose, they should immediately cover their eyes and nose with a damp cloth. There was a risk of an ammonia gas leak if the fire reached the cold storage machinery, said SDM Harpreet Singh, who along with Air Force authorities went to the scene to monitor the situation.

The fire broke out on Sunday evening in the national cold store in the village of Rampura. Soon after, fire engulfed the entire four-story warehouse. The presence of spices made it difficult for firefighters, while dense smoke engulfed the building due to the presence of plastic and thermocol.

“Although we managed to evacuate the two adjacent godowns, dense smoke and a burning sensation coupled with respiratory issues made it difficult for firefighters to put out the fire,” Fire Officer Lovepreet Singh said. He added that there was also no space for bids to enter the building.

The operation effectively started on Monday as the fire tenders of neighboring districts including Batala and Tarn Taran in addition to Khanna paper mill and the airport were also commissioned.

The walls of the storage were broken down to make room and water the interior of the building. It was now under control although firefighters were still there in case it erupted again, a fire officer said.

Ramdas said the cold storage building was completely damaged, while the equipment hidden there was emptied.

The SDM said an alert had been raised in adjacent areas in the event an ammonia gas leak was reported in the cold room.

Residents and patients of the Pingalwara Society Institute, located less than half a kilometer from the warehouse, were the hardest hit. Dr Inderjit Kaur, president of the Pingalwara Society, said around 250 patients and locals were transferred to other branches, while many spent the night in the open. She accused the district administration of mismanagement, while alleging that she remained busy with the visit of the chief minister.

US concerned about any country exercising with Russia: White House: The Tribune India