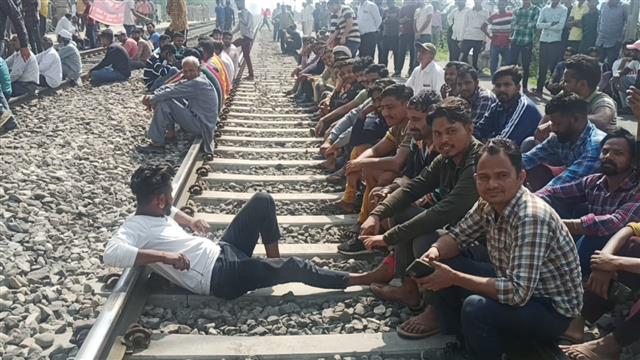 Demanding the halt of trains, residents of several villages on Sunday blocked the Ambala-Saharapur railway line for nearly three hours at the Tandwal village station in Ambala.

Locals said trains stopped at the station before the Covid lockdown two years ago, but that’s not the case now. They said that before the pandemic, around 10 trains used to stop at Tandwal village station but this was halted due to Covid restrictions. The situation normalized, but the trains did not stop, they lamented.

Residents said they had petitioned railway officials and government officials for months, but to no avail. Residents of Tandwal, Ghelri, Tandwali, Raomajra and several other villages gathered at the station, held up slogans in support of their demand and also against the government. Later, they blocked the Ambala-Saharapur section by sitting on the rails.

Sushil, a protester, said: “Students, especially girls, laborers and other daily passengers, from around 12 villages used to travel through passenger trains to reach their destinations, but they are all face drawbacks. Previously, while their journey to Ambala City by train cost 10-20 rupees per person, now they have to spend around 70-80 rupees as they are forced to use other modes of transport. First, we reach Barara to take a bus to the cantonment of Ambala, then we take the car to reach the town of Ambala.”

They demanded the stopping of train No. 04523 (Saharpur-Nangal Dam) as it was heading towards Ambala, the stopping of 04501/02 (Saharapur-Una-Saharapur) and the resumption of the ten trains which stopped here before the pandemic.

After getting information, Senior Commercial Manager of Ambala Division, Vivek Sharma arrived at the scene and managed to calm down the protesters. He assured them that their demands would be taken to the railway commission and asked for time until March 31 for the same. They had informed the headquarters of the demands of the villagers.

Meanwhile, Mullana Congressman Varun Chaudhry said, “While the government claims to build railways over bridges and develop railway infrastructure, no attention is paid to providing services to the poor. I will be raising the issue at the Haryana Assembly in the coming days.

Previously, our trip to Ambala town by train cost between 10 and 20 rupees per person. Now we have to spend around Rs70-80 as we are forced to use other modes of transport. First, we reach Barara to take a bus to the cantonment of Ambala, then we take an autorickshaw to reach the town of Ambala. Sushil, a protester