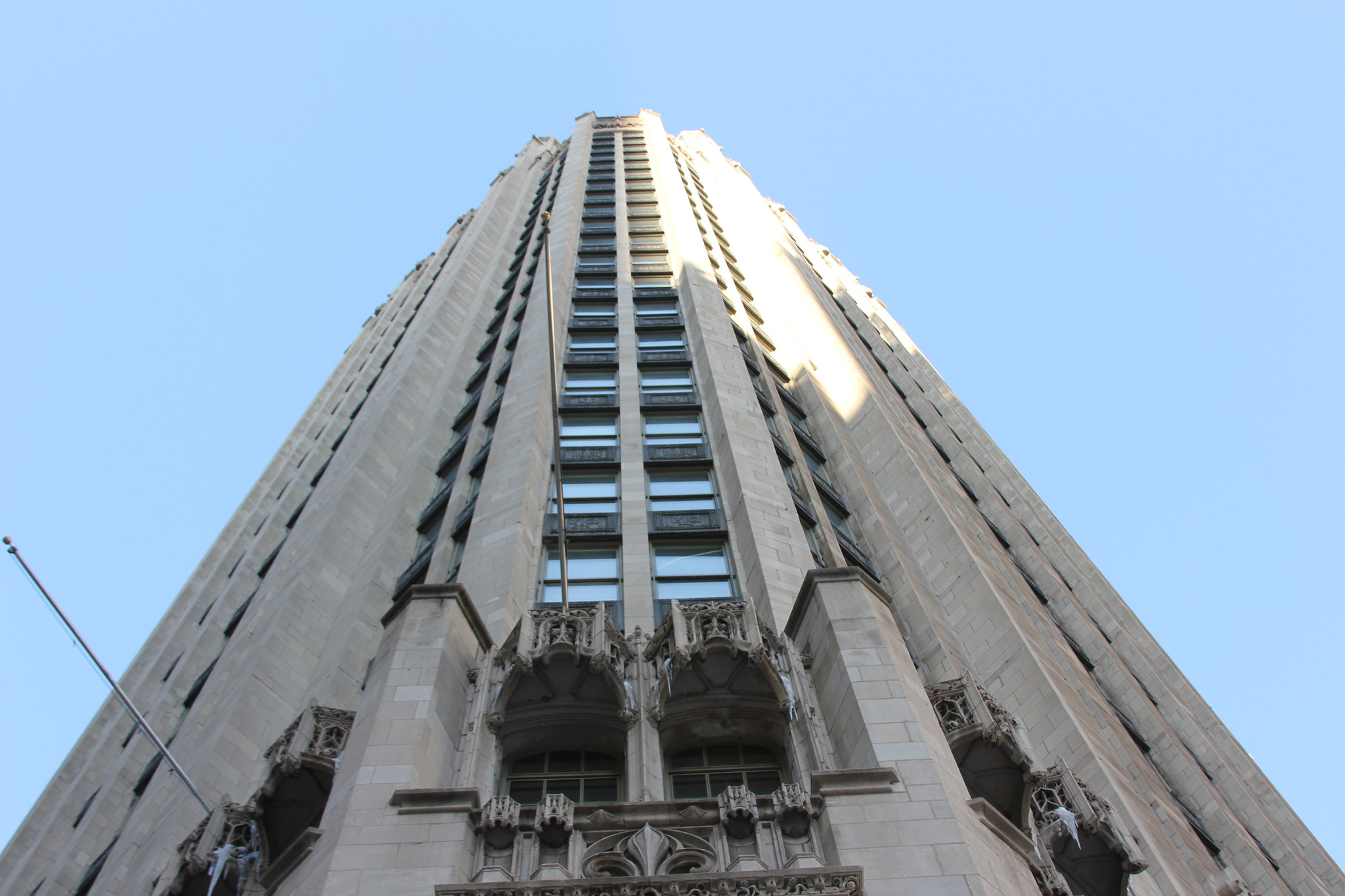 As Chicago’s iconic Tribune Towers are being converted from office to condo tower, a 1,388-foot-tall steel and glass tower could spring up next door. The owners of the Tribune Tower, Los Angeles-based CIM Group and Chicago-based Golub & Co, have revealed plans to build what could be Chicago’s second-tallest skyscraper.

After being sold in 2016 for $240 million to private developers, the upper floors of the 36-story, neo-Gothic Tribune Tower have been being demolished since last October. While the building’s facade and main hall were scarred in 1989, no such protection exists for the interiors, and Solomon Cordwell Buenz (SCB) is overseeing the conversion of what were once offices for Tribune Media in 165 condo units.

According to Chicago Grandstand, CIM Group and Golub proposed to develop a narrow-surface parking lot northeast of Tribune Tower into a mixed-use skyscraper designed by Chicago-based Adrian Smith + Gordon Gill Architecture. As the Chicago Tribune notes that Adrian Smith is no stranger to high-rise construction, having led the design team for the Burj Khalifa in Dubai and Trump Tower Chicago when he was with SOM. The new tower would eclipse Trump Tower Chicago as the second tallest in Chicago, as Trump Tower is only 1,171 feet tall and uses a spire to reach 1,388 feet.

The current proposal would see the creation of 220 hotel rooms and 158 condo units, as well as 500 parking spaces spread across floors two through eight of the new tower. Alderman Brendan Reilly described the design as “thin and hovering” based on renders he had seen. This thinness is likely a response to Ogden Slip’s protected view corridor, which means the Tribune Tower must remain visible from Lake Shore Drive as part of its historic status.

As conservatives question whether this new development, which would dwarf the 462-foot-tall Tribune Tower, is inappropriate for the site, the conversion of the Tribune Tower itself has also drawn their ire. The building’s limestone base contains inlaid pieces of famous buildings from around the world, and Alderman Reilly said these panels will be relocated to different areas of the tower.

The Tribune Tower was built in 1925 following a widely publicized design competition that awarded the $50,000 prize to New York-based Howells & Hood. The tower’s Indiana limestone facade, Gothic details, and flying buttressed crown have made it a fixture of Chicago’s skyline in the century since its opening.

The conversion to residential space and the opening of retail on the ground floor is expected to be completed in 2020; all construction on the adjacent lot is suspended until the Tribune Tower project is complete. The plans shown above are still subject to change as developers still need to secure financing and lot rezoning before they can proceed.