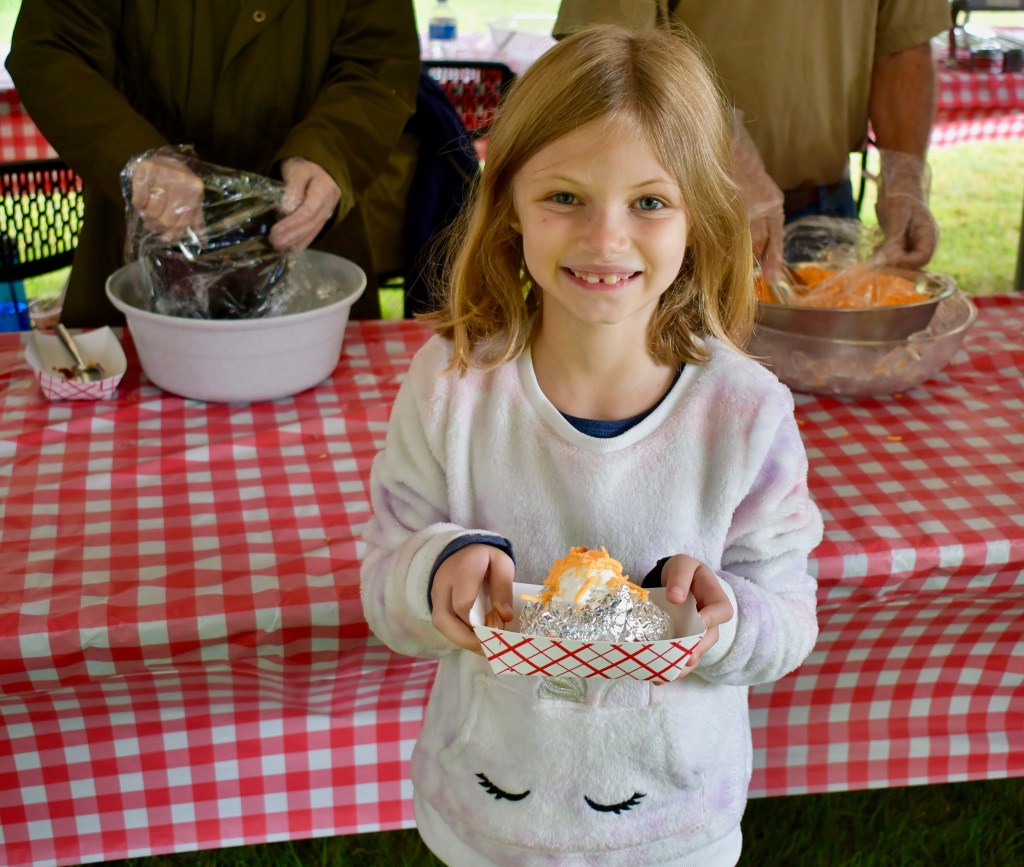 If you saw smoke billowing from the grounds of the Centennial Village Museum on Saturday, there was no cause for alarm.

After two long years, Potato Day has returned to the museum with baked potatoes, games, music and more.

Potato Day, organized by the Friends of Greeley Museums, began in 1987 as a way for the organization to help raise funds for museums in the town of Greeley. To date, the group has donated over $300,000 to museums for educational programs and preservation projects.

Organizers canceled the popular event in 2020 and 2021 due to the pandemic.

Early Saturday morning, members of the organization and volunteers lit a giant potato roaster and began baking hundreds of potatoes for the fundraiser.

Built for the event, the roaster is only used one day a year, said Potato Day committee chairman Nathaniel Johnson. Depending on the size of the potatoes, the black steel baker can bake about 300-400 potatoes at a time.

Despite the rainy weather, about 180 potato lovers had crossed the spud line in the first hour.

“You know, this is our first year back after two years of dealing with COVID, and I’m happy with how it’s going,” Johnson said. “We have enough potatoes for 1,500 people, so we are well prepared.”

Ivey Dreher and her daughter, Lila, were thrilled to return to the event.

Ivey has been coming since the event began, and Lila – whose favorite topping is bacon – has been a frequent attendee since birth.

“We’re so, so happy it’s back. We really missed it,” Ivey Dreher said. “We eat potatoes all the time. We love baked potatoes.

One of the best things about the event, besides stocking up on carbs for a good cause, is that the potatoes are locally grown and donated by Strohauer Farms in LaSalle. The farm has been supplying potatoes for the event for six years.

The event also included live music on two stages, a re-enactment by the Buffalo Soldiers, lace-making training from the Rocky Mountain Lace Guild, and visits with the museum’s farm animals.

The museum grounds were open, allowing visitors to tour the buildings and learn about the history of the museum as well as view exhibits in the garage and print shop.

If you missed Potato Day 2022, no worries. There are many more events that the Greeley Museums have scheduled on their calendar.

Dating Diaries: Meeting at the hotel was a turning point