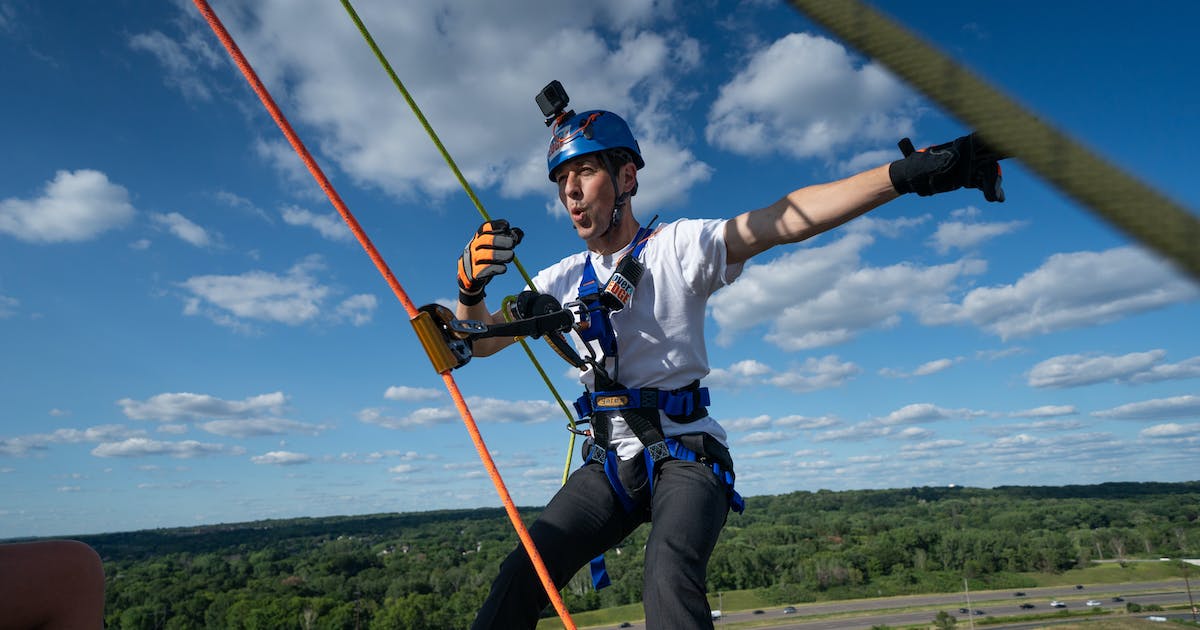 Hundreds of Minnesotans will rappel down the side of the 155-foot Omni Viking Lakes Hotel this weekend, with the first batch descending Friday evening as part of a Salvation Army effort to raise 1 million dollars for the homeless.

St. Paul Mayor Melvin Carter and Minneapolis Mayor Jacob Frey were among 20 people who abseiled Friday night as part of the “Down for the Challenge” event, alongside a dozen veterans of two different non-profit organizations and Viktor, the Vikings mascot.

“Melvin and I were staring adversity in the face,” Frey joked. “It’s for a cause we believe in. I can’t think of a greater cause than providing people with housing.”

Dozens more — between 160 and 180 in all, each having raised at least $1,000 — will rappel down the Eagan Hotel on Saturday, appearing to walk backwards through the building while suspended by neon yellow and orange ropes.

This is the second year the Salvation Army Northern Division, which includes North Dakota and Minnesota, has held a major summer fundraiser. Last year, hundreds of Minnesotans abseiled down a 14-story Mall of America office tower in an effort to raise $500,000 to meet the growing demand for food, shelter beds and other needs.

Homelessness has increased by 30% this year, said Maj. Scott Shelbourn, the Salvation Army’s Twin Towns commander, and families are being hit harder than ever by inflation.

Every day, about 20,000 Minnesotans are homeless and nearly 70,000 are at risk of eviction because they are behind on their rent or their mortgage, he said.

And this week, 1,000 people showed up at the Salvation Army food shelf in downtown St. Paul, said Brian Molochon, Salvation Army’s executive director of development, adding that the family average is spending $500 more per month than six months ago due to inflation.

“I think the next 16 to 18 months will be the most traumatic and dramatic for our communities,” he said. “It’s getting worse.”

The event was intended to draw particular attention to the issue of homelessness among veterans. Veterans and staff from Every Third Saturday and 23rd Veteran, two veterans-related nonprofits, abseiled down the side of the hotel on Friday.

The Salvation Army, which has a budget of $24 million, has specially designed rooms in shelters for vets and two transitional housing units – designed to prepare for living alone – just for them too, said Molochon.

Priscilla Good Bear, a former Marine who works for the Minneapolis Police Department and also volunteers with the 23rd Veteran, said many veterans were homeless or had been on the verge of homelessness by being nearly deported.

The organization helps veterans transition from active duty to normal life, she said, by empowering them with positive coping skills and focusing on a holistic view of wellness.

She said supporting the Salvation Army is also personal to her, as she grew up with a single mother and relied on the organization for food, eviction assistance and help at Christmas. .

“If it hadn’t been for the Salvation Army, I probably wouldn’t be here,” Good Bear said. “I’m very grateful.”