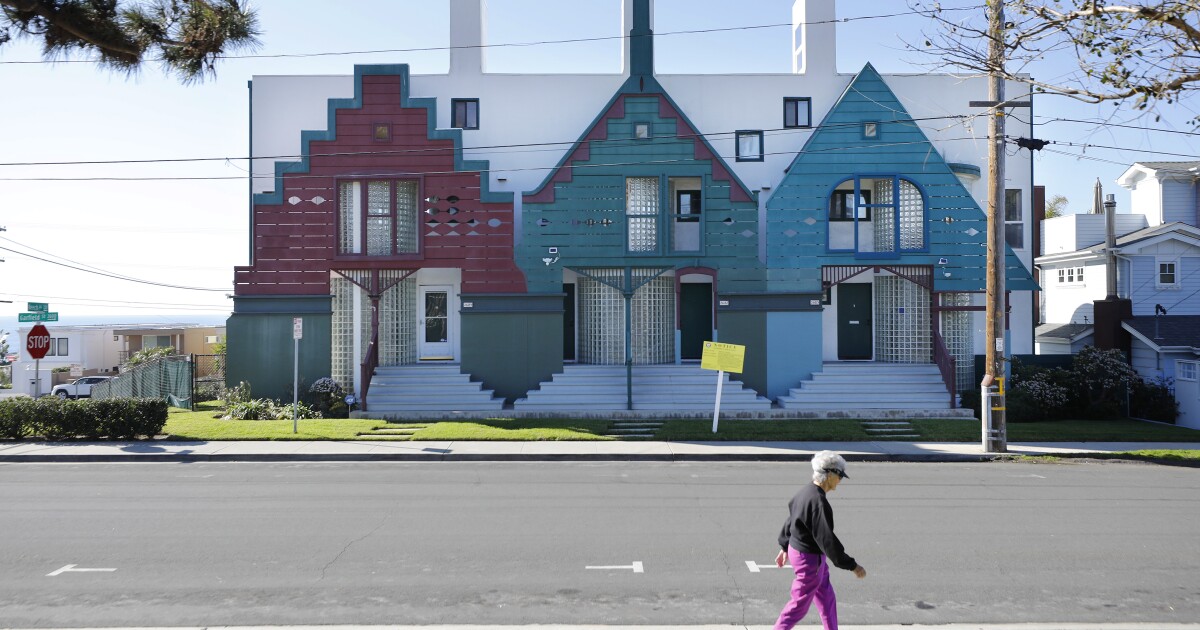 Fans of modern architecture are hoping to save a distinctive little condominium building known for its whimsical appearance near Carlsbad’s Magee Park.

The 40-year-old building, sometimes called the Victor Condo, on Garfield Street is an early example of a postmodern style often referred to as “Blendo” created by San Diego architects Ted Smith and Kathleen McCormick.

“Victor Condo is clearly culturally significant and…a fine example of a pivotal historical period in the growth of Carlsbad’s building environment from a small coastal community to a vibrant city worthy of vibrant architecture” , said Peter Jensen, writer and editor at Sunset Magazine and San Diego Home/Garden magazine for 40 years.

As “affordable yet stylishly meaningful (not to mention exciting) dwellings”, the buildings are an example of late 20th-century innovation in a field that too often relies on cookie-cutter architecture. “, Jensen said in comments on a petition to save the structure.

The owner and developer of the property is Renee Wailes, who is represented by John Beery of BGI Architecture in Carlsbad. Beery declined to answer questions about the project.

“BGI has a privacy policy supported by our customers,” Beery said in an email. “We only discuss our projects or our clients after the project is complete and only with client approval.”

The proposal to demolish the building and replace it with a three-unit luxury condominium project was originally scheduled for a Carlsbad Planning Commission hearing on January 19. However, the city recently requested a third-party review and will reschedule the hearing, likely for a meeting in a month or two, a city spokesperson said.

Alarmed by a yellow project notice posted on the front of the Garfield Street property, neighbors and supporters of the building started an online petition titled Save Victor Condo on ipetitions.com. As of Friday, it had more than 210 signatures and 70 comments.

“We believe the building qualifies…as a design at the forefront of an important architectural movement,” states the petition posted by San Diego architect Patrick Cordelle, who works with Smith and McCormick.

“Ted and Kathy have been a huge inspiration to me,” Cordelle said via email Tuesday. “Both are responsible for some of the most beautiful and thought-provoking buildings in our region, and I believe they will go down in history as some of the greatest American architects of our time.”

Smith and McCormick created the Blendo style to layer surrounding styles into a single building. The Garfield Street structure mixes the styles of the adjacent Victorian house, now a museum, in Magee Park with the white buildings of the nearby Army and Navy Academy and other surrounding styles.

The architects dubbed their project the Victor Condos in reference to the modified Victorian style of the facade, Cordelle said, and the nickname has stuck to this day.

The style spread to Los Angeles in the 1980s and 1990s, where leading architects began to explore new ways to tap into diverse local sources in ways that brought humor, free form, and a philosophical agenda to their designs.

Other San Diego projects by Smith, McCormick and another partner, Lloyd Russell, include the Abpopa Hotel in Hillcrest, the Merrimac Building in Little Italy and the Essex Apartments on State Street.

A historical analysis report written for the Carlsbad Planning Department in October by San Diego attorney Scott Moomjian concludes that the Garfield Street property is not historically or architecturally significant.

“No historical evidence has been identified that would support the claim that the property exemplifies or reflects any particular elements of the cultural, social, economic, political, aesthetic, technical or architectural history of Carlsbad,” Moomjian said in his report. “The building does not in any way illustrate or reflect the ‘special elements’ of the city’s history, nor do other existing structures, located in the same location, within the community.”

Dirk Sutro, Carlsbad resident, author, former editor of San Diego Home/Garden and architecture critic for the San Diego edition of the Los Angeles Times from 1988 to 1992, is among a number of people who disagree with counsel’s conclusion.

“Carlsbad’s Victor project is a pivotal example of Smith’s early work and is clearly worth preserving,” Sutro said in a rebuttal to the attorney’s report.

“Victor Condos is a whimsical and distinctive building in a neighborhood not usually distinguished by unique architecture,” he said. “It’s the most eye-catching building in the area.”

The building’s front facade “takes the form of three distinct townhouses and has an engaging playfulness reminiscent of a theme park or Hollywood movie set,” Sutro said. “The use of glass blocks is reminiscent of buildings from the Art Deco era of 1930s architecture.”

His creative use of concrete, wood and stucco in simple shapes is an example of how basic materials can be used in exciting ways, Sutro said.

Preserving the building reduces the need for wood, glass and other materials that are scarce, require transportation and increase a region’s carbon footprint, he said.

In addition, the existing building has three main condominiums and three smaller apartments for a total of six rental units. Replacing it with three luxury units would reduce the city’s housing supply and increase housing costs, Sutro said.