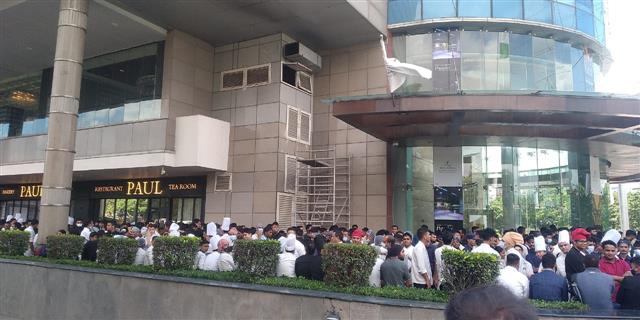 A bomb hoax sparked panic at the Leela Ambience Hotel in Gurugram on Tuesday.

According to sources, a call from an unidentified caller was received on the hotel’s landline number around 11:35 a.m. The caller in his 15 second call said a bomb had been planted in the hotel. Hotel staff informed the police and security agencies.

The hotel was evacuated and staff members and guests stood in front of the hotel as the bomb squad, along with local police and canine squad, searched the hotel premises.

A police official said the call was made via a mobile phone and was turned off shortly after the call.

The caller was identified as a 24 year old mental patient. He suffers from autism spectrum disorder and is undergoing treatment in a sector 47 psychiatric hospital here, Gurugram police said.

After a search that lasted over an hour and a half, police found nothing suspicious and said the threatening call was a hoax.

“Nothing suspicious was found on the hotel premises and the call made by a mentally ill person was a hoax. An FIR is being filed against the caller and further action will be taken in accordance with the law,” said Virender Vij, DCP (east).

Condos sold, and for how much, in Mississauga and Regent Park