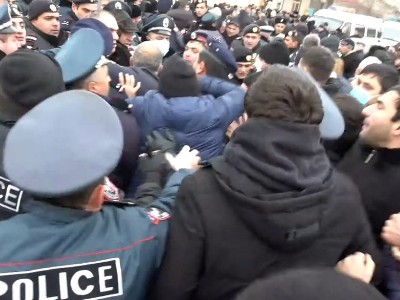 Armenian police special forces forcibly apprehended residents of the village of Parakar who closed the highway leading to Zvartnots.

And the road has been reopened.

The residents of Parakar had blocked this highway because it had been several hours since Volodya Grigoryan – the mayoral candidate of the village of the Country to Live party – and his teammates were not allowed to enter the town hall building.

The police closed the entrance to the town hall of Parakar where the inauguration of the new mayor of the village was scheduled for today.

The Country to Live party, which considers its candidate Grigoryan to have been elected mayor of the village in recent local elections, has set up a platform outside and held a nomination.

The police informed that there was a legal dispute over the results of the aforementioned local election, and that is why they are not allowed to allow them to enter the community hall building.

As Armenian News-NEWS.am reported earlier, the situation is tense Thursday morning in the village of Parakar in Armenia.

Today is the investiture day of the new mayor of the village, but the fact is that two people at a time – those at the top of the electoral rolls of the Country to Live party and the â€œDavit Minasyanâ€ bloc – consider themselves elected community leader.

After that, Parakar village council members supporting Davit Manukyan’s candidacy came to the council, and they elected the mayor of Manukyan village, with 11 votes, or over 50 percent.

Despite the failure of the hotel acquisition, the investor remains committed