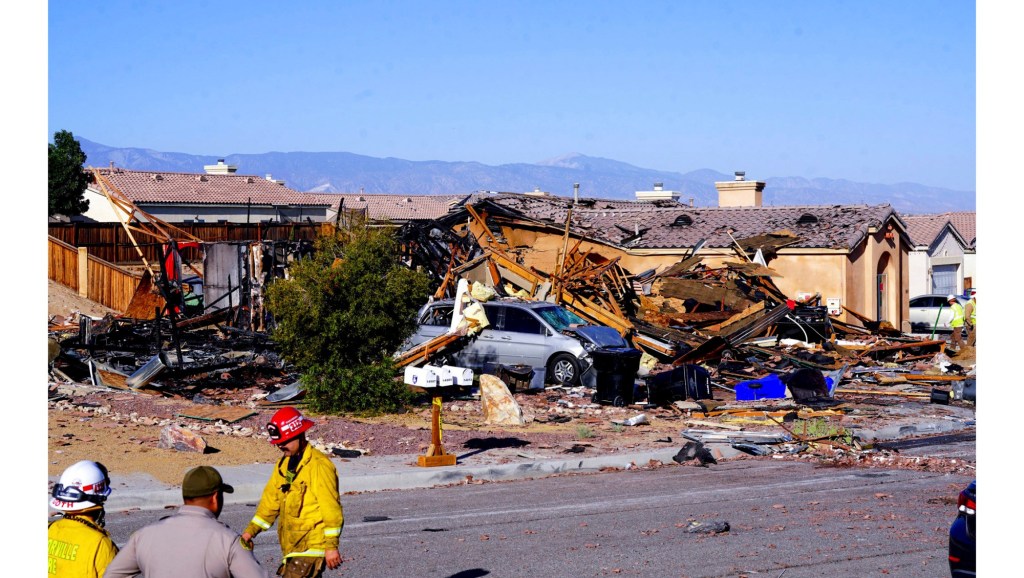 VICTORVILLE — A predawn explosion and fire flattened a home, injuring one person inside and damaged at least two other homes on Wednesday, authorities said.

The blast happened shortly before 3 a.m. in the San Bernardino County desert community of Victorville, in the 14900 block of Adalane Court, about an hour’s drive northeast of Los Angeles. The cause of the explosion was under investigation.

Brenda Ogaz said she was awake when she heard an explosion, then a second.

“I looked out the window and the whole house was engulfed and there was what looked like fireworks,” she told the Victor Valley News Group. “We all rushed to try to help, but there was nothing we could do.”

Joshlyn Brunt said the force of the blast threw her neighbor into her garden.

“I heard her screaming, ‘Help me, call the police,’ and she was on my back porch,” Brunt told KCBS-TV. She said she and her children were ordered to leave the house due to a gas leak.

A 40-year-old woman in the home was hospitalized with burns, authorities said. She was in critical but stable condition, according to the county sheriff’s department.

Neighbors told KCBS-TV that the family who lived in the house raised dogs. An injured dog was taken away by animal control officers.

At least two damaged homes were tagged red because they were considered unsafe for people, firefighters said.

Neighbors told KCBS-TV the gas company was in the area about two weeks ago.